Rush hour at Newbury Boat Company at 0805 on Thursday morning!  Luckily we were up and about. Unheard of!!!

Did I do this?

I cam through Reading station on a Sunday a couple of weeks ago. There was a replacement bus service to Neabury. 5 minutes walk away down an area that is being regenerated and the route there not signed. I was told by a railway employee that at they has been asking for signs for 18 months. Some of you will recall the bus broke down on the M4 so in the hour we had to stand and wait for a replacement placement bus, I amused myself by emailing First Great Western Customer Services.  I haven't had a reply but when I went rough Reading  last Friday on the way to Heathrow - 4 days after my email I saw 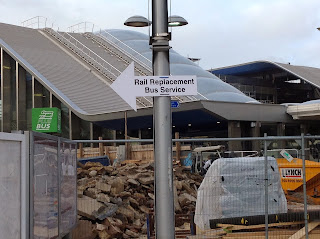 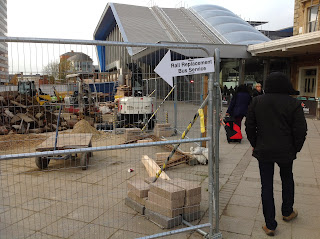 Just a sample of the dozen,or so signs!!

Back from my weekend in Germany. Foolishly, I had left it too late to check out the Christmas Market situation and so flew back the day they opened. Actually, it could be for the best. Financially speaking.

It was great to see Jo and Bob. Friends since 1997 when we met in the Falklands. I watched their romance blossom and one, never to be forgotten evening in London, Bob bought me dinner at the Criterion and I listened to him talk about Jo. I will never forget it because of the room, the food and the wine. Bob will never forget it because we'd schlepped for miles round Bloomsbury first and he was wearing new shoes!

So I have some fantastic German food to work off and a couple of bottles of very good dry German Riesling to enjoy.

It's 20 years since I last lived in Germany. I was in Berlin last year. Huge changes there but not so much in what we used to call 'The Zone'. Those who know will be saying how much that phrase dates me!

The highlight of the weekend was mine and Jo's outing to see Curtis Stigers on Saturday evening. Bob has only just moved out to Dusseldorf and I hadn't realised when the tickets were arranged that he would be there. And because it was the only show in the north of Germany it sold out in a nano second, He generously chauffeured us.


The show was in The Orangerie in the grounds of a Schloss.  Lovely setting. As many of you will

know, or have worked out by now, I am huge Stigers fan and have seen him in shedloads of venues but this just seemed a but special. Jo has seen him in New York - which is still pretty near the top of my To Do List.

He was on great form. His co-performer, James Schofield, is a very gifted acoustic guitarist. He seems very quiet but he has the most expressive face when he's playing. Mr S was his usually, funny, soulful self. He always does a 'meet and greet' at the end of his shows. I don't usually stay.  But I was lucky enough to meet him in a coffee shop last year and since the start of the year we've been in the Tweet conversations a fair number of times. So, we went to say hello. He is just so nice. AND HE KNEW WHO I WAS!!!  He was really welcoming. We got kissed on the cheek . He asked me about QISMA. You know when you can't quite believe something - that!

Because I didn't take the roaming package that Orange aka known as EE offered me for my trip I can't send photos from my phone to my iPad so a report from the German weekend is on hold until tomorrow. Not that I've got any amazing photos but ....
Posted by Unknown at 11:18 No comments:

Sitting in Terminal 1 at Heathrow. Transport so smooth that I'm here far too early but better than the alternative. Bought father in laws Christmas present in duty free. Resisted buying perfume. Had some fantastic soothing eye gel dabbed on in the beauty sanctuary. Treated myself to a lovely and amazingly reasonable breakfast in Estcafe. Now taking advantage of 45 min free wifi. Stress free travel so far! At t'other end I expect to meet German efficiency but it will have competition. In years gone by, I used to Euro commute. Flying into Dusseldorf every Friday afternoon and back to London on Monday morning. Another life and 22 years ago. I expect to see some changes!!

Lots of fungi around at the moment but I'm sure none of it is edible!  I wonder if we could train LJ to hunt for truffle? I can hear people falling on the floor laughing at the thought of  us actually training LJ!  The fact that he is a lovely boy is definitely nature over nurture!
Posted by Unknown at 19:15 No comments:

Why didn't I know that?

Younger sister and I went to a Patty Griffin 'gig' at Sheffield City Hall last night. In the Ballroom with lovely Yorkshire Roses everywhere - just for you Andy! Excellent show and I learnt that younger sister had seen The Marvellous Mr Curtis Stigers there in the early 1990s. (His long haired pop days).  Not that there was anything wrong with his long haired pop days but he is sooooooo fab now.  I confess, as a huge fan, I was a bit surprised not to have known that.  We had a huge laugh later when Curtis replied to a Tweet  asking why I didn't know - claiming they'd had a bit of a fling and I probably didn't know about that either! I think he was joking. I might ask him about it if I get the chance at his show in Germany next Saturday!!! 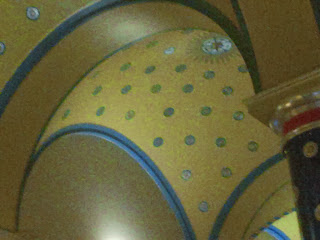 The journey back was completely uneventful until ..... Until Alistair, who had offered to pick me up at Reading to give the Terminator a run and save me from waiting for the replacement bus, didn't arrive. He hasn't quite mastered the requirement to read the answer to a text when he asks you a question! So, replacement bus it was. We approached the turn off for Newbury when clouds of smoke  started pouring out of the engine and we stopped on the hard shoulder and de-bused!

The Highway Patrol led us to safety! 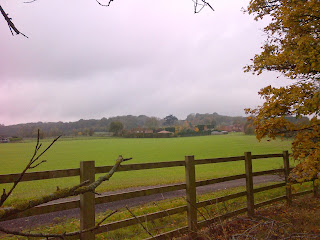 Nice, but I do prefer this one! Good to get a walk in with the little one later. Just glad to be back in time for that. 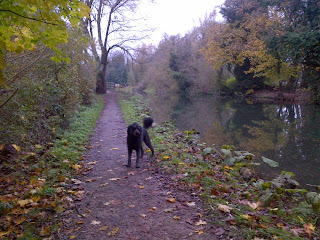 Ey up our lass

Back from a lovely 3 nights in Yorkshire. Perfik weather. Time with Dad. Night out with younger sister. Bit of mooching. Looking at how Rotherham is faring. Good news and bad news there.  Took some photos for future NZ boaters who are heading this way next year.  They have a historical link to All Saints Church. 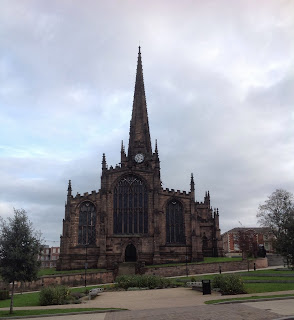 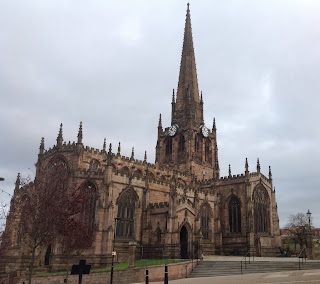 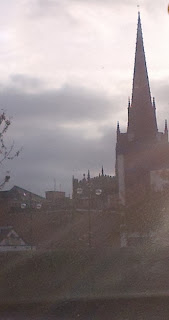 The town has lost most of it's shops to the centres at Meadowhall and Parkgate. The area round the church has recently had a lot of work done and hopefully the much needed regeneration will continue. 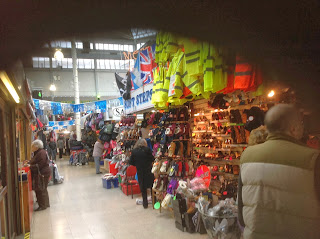 Meadowhall as I left from the station there this morning 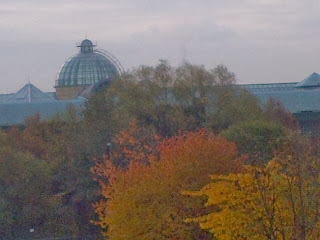 Normal service can be resumed

Writing this at 0650. Not just early for me but practically the middle of the night! The last of  the early mornings as Derek and Emma arrived home late last night. We were deep into The Escape Artist but noticed their lights were on as we put ours out.

I spotted boating buddies Irene and Andy from NB KAMILI featuring in the NB DERWENT6  blog from the weekend so quickly sent off an email. Had a great catch up reply. Good to know they've had such a lovely year and on current plans looks like another ahead. We will be East and they will be West. Shame they aren't bloggers or Twitters even.

I am also delighted to report  food is back on the agenda. Starving the Norovirus  out of your system is the way. I felt so good yesterday morning I was out raking leaves at 0740.

Sad to say I've managed to catch the  Norovirus  and I can tell you, it's alternative name does NOT begin to describe the symptoms. Best really that you don't know. I actually don't feel too bad now but  from this morning I am on a 48 hour bread and water diet - but hold the bread!

I haven't wanted to temp fate by blogging that things were going well whilst we're in charge. With Derek and Emma due back on Tuesday I only need to keep my fingers crossed for another two days! The hardest task by far has been mastering the burglar alarm! Sorry marina. I am pleased to report I seem to have conquered it.

We're hoping for nice weather on Tuesday so we can have a go at the leaves. I would say a last go at the leaves but I somehow don't think our leaf clearing duties will stop. Not on 'our' side of the Marina anyway.

Have I mentioned Dylan? Not sure how he is going to react to the return of his Mum and Dad .....  A stiff ignoring I expect.

This poor boat is moored on the way into Newbury. CRT have been trying to contact the owner. It was open to the elements on both sides but the board has been recently put up. Wood is bagged and on the roof........... as if they were set for the winter.  Now looking very lonely.