Deprived of Internet and other horror stories

Well...not exactly horror stories...or only related to the weather. Wet and very windy weather has had us grabbing weather Windows and had us off Lough Ree sooner than we would have liked but we would have liked and once again, sitting out bad weather in Ballyleague where you can get the magical combination of water and supplies.

We left and headed to Richmond Harbour and moved on. A bit full. Possibly of boats that don't move very often. Just a guess. Great lock keeper. We kept on and moored at Roosky. Lovely moorings and good weather. Two nights there and 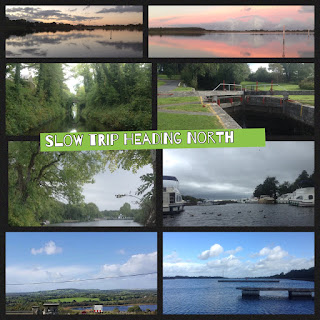 the short hop to Dromod where the weather closed in again. A convoy of 10 very large cruisers came in yesterday. A Swiss group of 53 who cruise together somewhere in Europe every year. Fortunately, they were all off to Carrick today, so not fighting them for limited space at  Kilglass. What a stunning spot.
Posted by Unknown at 23:50 No comments:

Coffee with the First Lady

Alf, owner of barge First Lady, came out to give us a wave as we were cruising,past his winter mooring yesterday. We were way north last time we saw him. Coffee was offered and accepted and we moored alongside him amd went onboard. We could probably have sat there all day chatting and laughing but...move on we did. Into Quigley's Marina for fuel, water and made use of their skip. Such a helpful team there.....though that is no surprise. Then up to the Inny River for some peace and quiet! We had intended to stay two nights but........ 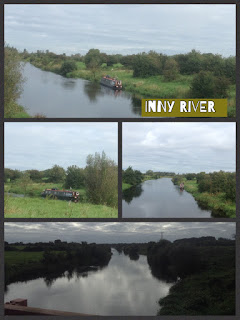 Plans for the weekend revised after an up to date weather forecast. We won't run back into Athlone but head for Lecarrow tomorrow and continue north from there.
Posted by Unknown at 10:59 No comments:

Well ..perhaps highlife is an exaggeration but after last weekend in Ballinasloe and Thursday in Athlone it was time for a weekend of quiet. And...we found,the ideal spot  in Killinure Lough to do just that. With Nene ladser in place ..with minor H&S adjustments to allow for steepness.. Humans and woofer are happy. LJ was doubtful but ok now. 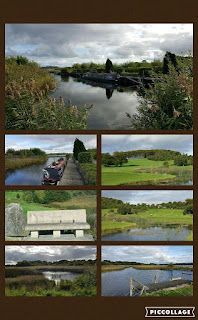 We are on the edge of Glasson Country hotel and Golf Course. Very lovely all round. Intrigued and amused by the bench with two champagne flutes on it. No-one in sight ..a,proposal,gone wrong...left for a couple who never,go there...I can see a book and film deal ahead!!
Posted by Unknown at 16:27 No comments:

A lot of history.

Over 250000 visitors a year go to Clonmacnoise. It was,extremely busy when we went down the Shannon in August. This trip, we shared it with just four other boats overnight. It was a monastic settlement in the 6th century. The high kings of Ireland used to be buried there. More recently, Pope John Paul II celebrated Mass there in his 1979 visit to Ireland. 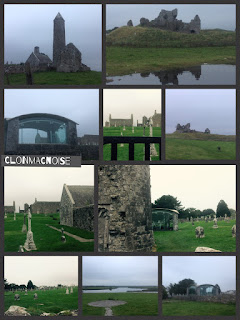 Timing has been particularly good this weekend which....unlike the weather we are reading about in UK has been very windy with intermittent showers.

Six years of living on a boat have made us expert shower dodgers and our wind avoidance skills are improving by the day.

First round,on the haircuts went to me. Getting a recommendation from lovely Irish woman who walked me in the direction of Tesco. Great conversation that covered ..  with no particular connection.... disenchantment, families, boating, foreign travel and affairs of the heart. Not bad on 5 minutes acquaintance. All that and a great hairdresser recommendation as well.

Ballinaslone has one of oldest horse festivals in Europe. Happens in a few weeks. The town will look very different then...with upwards of 80,000 descending!!  No... we won't be here! 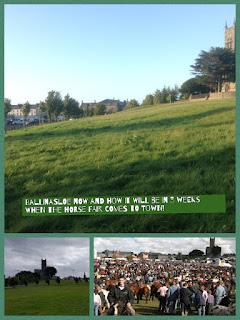 LJ gets his haircut tomorrow and we hope to leave on Wednesday...weather permitting.
Posted by Unknown at 14:39 No comments:

Not the number that have read this blog...the distance we have travelled since QISMA went in the water here in March.  A bit  more now as we reach that milestone as we crossed over to Terryglass on Sunday.

Terryglass is a regular winner of tidiest village in Ireland. It's small but...perfectly formed. We'd been told by a few boaters that it was a bit of a boat park and it did look that way. The majority of the boats that left Portumna on Saturday were there.....once again without owners on board. A bit of a weekend shuffle.

Still, there was the ideal QISMA size mooring I a very easy place to manoeuvre into so all was well.

Since then we have moved back onto the Shannon and even further...onto the River Suck.

With overnights at Meelick Quay ...a very Great Ouse like mooring... And with Carickcraft at Banagher  ..  we can't get LJ off in the public harbour because the jetty is high with the roof of the boat level with the ground.  To high to jump and too heavy to lift ....LJ not me!

The forecast for the weekend...wet and windy!! So up early today and away by 0830 for the run up to Ballinasloe where LJ has a hair appointment and I might do the same. Ballinasloe has mainstream shops ...a Dunnes included. Some shopping might be in my future. 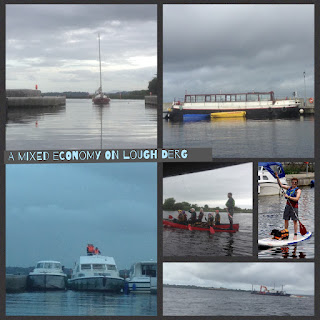 I just love mooring at Portumna. A great mooring in the grounds of the castle. Forest,walks for LJ and a Supervalu in the town that asks...would you like that delivered when you mention you're on a boat.

There is a lot of movement in and out of the harbour as it's a last stop on Loch Derg before or after Portumna Bridge which currently opens 5 times a day to allow boats through, stopping traffic on a main road to/from the West in the process.

We are having, for us, a slightly extended stay. This will be our third night and although there is a steady turnover of boats traffic is less than 50% of  when we first came onto Loch Dergh. 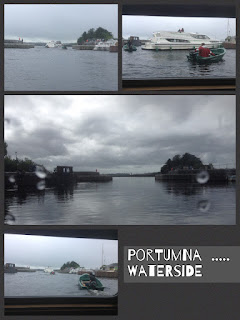 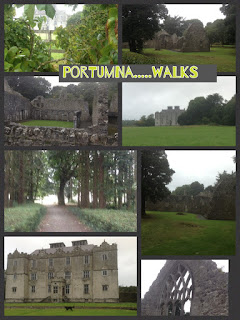